Highlander/Highland  Lynx was developed to reflect the look of a Bobcat.  To create this look, a Desert Lynx, another breed that resembles a wild cat,  to a Jungle Curl.  These Jungle Curls were polydactyl cats that also carried the dominant curl gene in their ears.  These cats are believed to have developed a different or at least a spontaneous curl mutation on their own, just as the curled cats that were discovered in Canada in the 1950's.  According to original documentation, different breeds including domestic shorthairs were used to create the Desert and Highland Lynx.  Though there have been claims of wild/domestic hybridization being used, there are no documented fertility issues in any of these cats.


Some Highlander/Highland Lynx cats have  polydactyl feet(extra toes).  They have a dog-like personality(they will come when you call them, they will beg for food, they even play fetch, they can be leash trained & even toilet trained).
They are very intelligent and very active.   They are very muscular. The average weight of a Highland Lynx is 20-25 lbs for a male and females 10-17 lbs. They dont reach full maturity until the age of 3 yrs.

We bought our first Highland lynx in the late summer of 2017, and totally fell in love with their personality!!!

All our cats / kittens are TICA registered.

For information about kittens 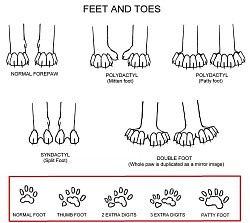